Equal Exchange's mission is to build long-term trade partnerships that are economically just and environmentally sound, to foster mutually beneficial relationships between farmers and consumers and to demonstrate, through our success, the contribution of worker co-operatives and Fair Trade to a more equitable, democratic and sustainable world.


Fairness to farmers. A closer connection between people and the farmers we all rely on.

This was the essence of the vision that the three Equal Exchange founders, Jonathan Rosenthal, Michael Rozyne and Rink Dickinson, held in their minds and hearts as they stood together on a metaphorical cliff back in 1986.

The three, who had met each other as managers at a New England food co-op, were part of a movement to transform the relationship between the public and food producers. At the time, however, these efforts didn't extend to farmers outside of the U.S.

The founders decided to meet once a week — and did so for three years — to discuss how best to change the way food is grown, bought, and sold around the world. At the end of this time they had a plan for a new organization called Equal Exchange that would be: 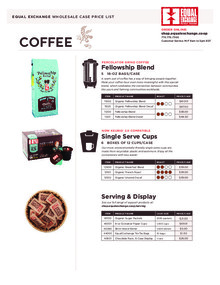 We place an order with Equal Exchange quarterly. Order dates for 2019 are:

Please email your order to alexis@fmhpc.org by the date listed above. Thank you for partnering with us to support this incredible organization!

First Meridian Heights Presbyterian Church (U.S.A.) is a spiritually growing family of faith in the heart of the Meridian-Kessler, SoBro and Butler-Tarkington neighborhoods. We strive to be open to all, to respond to the needs within our family and to those around us, reflecting the love of God in Jesus Christ through nurture, social awareness, and service. Here you will find a casual, but caring group. We are a small church, yet we maintain several ministries and small study groups. If you want a church where you will not get lost in the crowd, but instead will feel warmly welcomed – try visiting us Sunday. Our mission:  To serve, love and grow in ever-widening circles of Christ’s grace.